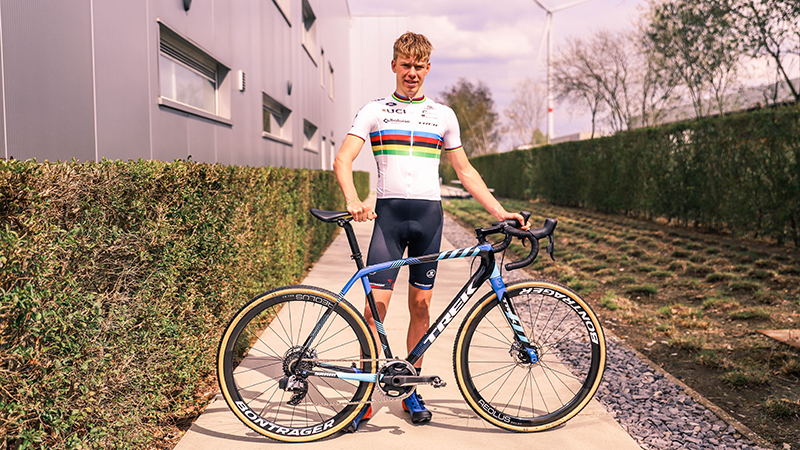 
Dutchman and U23 CX world champion Pim Ronhaar strengthens the Baloise Trek Lions team. The 19-year-old rider from the Netherlands comes over from Pauwels Sauzen-Bingoal and signs a three-year contract.

Earlier this year Ronhaar conquered the U23 world champion title in the sand of Ostend by holding off Ryan Kamp and Timo Kielich. This fall Ronhaar will start his third year as an U23 rider. He will be Baloise Trek Lions' fourth U23 rider, next to Thibau Nys, Ward Huybs and Shirin van Anrooij. On Saturday Pim will make his debut in the team colors in Dwars door het Hageland. One week later he will line-up in the Baloise Belgium Tour.

"I am looking forward to join the Baloise Trek rider group. The team spirit gives me a good feeling here. It is a cohesive group in which everyone seems getting along well. That is very important to me. The results and support are more than excellent. I start this new challenge with a positive feeling. "

"It was not easy to ride among the pros last season. One of the highlights among the elite was the very tough race in Dendermonde, in which I finished 8th. Those kinds of tough courses, such as the Koppenberg or Overijse, suit me. I also cope well with the sand. I put the icing on the cake of last season in the sand of Ostend with the U23 world title. "

"First of all, I hope that I will be able to compete in some U23 races in the rainbow jersey next winter. I would like to do that in combination with a number of elite races. Of course the championships are always a goal, but first and foremost I want to enjoy my rainbow jersey."

"From an extra sportive point of view, I would describe myself as a cheerful and grateful person. I enjoy life. For example, I sometimes like to go out on my motorcycle. This gives me an enormous mental boost every time."

"Pim Ronhaar has given a strong impression in the youth categories over recent years. We are therefore extremely proud to welcome him to the Baloise Trek Lions. With Pim we strengthen ourselves with an eye on the next years. The Baloise Trek Lions team can offer added value to further develop Pim's talent. "